OE and former School Captain Brian Morgan has enjoyed a long and successful career in teaching in New Hampshire, including the appointment to the faculty of the Phillips Exeter Academy and as Director of its Summer School. The school is one of the oldest and most prestigious academic institutions in the United States. After winning a W.H. Rhodes scholarship to travel in Canada, Brian went on to study French and Russian at Cambridge University. As part of a British Council Exchange Programme, he was privileged to go to the USSR in the year of the 50th anniversary of the Great October Socialist Revolution.

After 26 years at Exeter, Brian became Director of the progressive Putney School in Vermont for 12 years and then headed up other schools before joining his wife’s educational consultancy. He is hoping to retire this year.

The biggest lesson I learned [from Emanuel] was to view prefecture as service, and to this day I look for ways to serve the wider community.

I have so many great memories!  There were such inspirational teachers, among whom were Tom Graham, Claude “Taffy” Neath, Aaron Rogers, Peter Hendry, Dick Raine, Colonel Charles Hill and Major Cruse.

What were your responsibilities as School Captain?

The primary responsibility of school prefects in those days was to maintain discipline and general order, so that teachers could focus on teaching.  Discipline consisted of detention for minor infractions, and, sadly, caning for the more serious.

Other responsibilities included organising the occasional concert or dance, which involved inviting guests from a local girls’ school.  I also represented the school at important events and made the occasional speech. I remember my first ride in a Rolls Royce with the Lord Mayor of London wearing my borrowed dinner jacket. I forget the precise occasion, but it was nerve-wracking!

The School Captain also met with the Head on a weekly basis to update him on the state of the School. 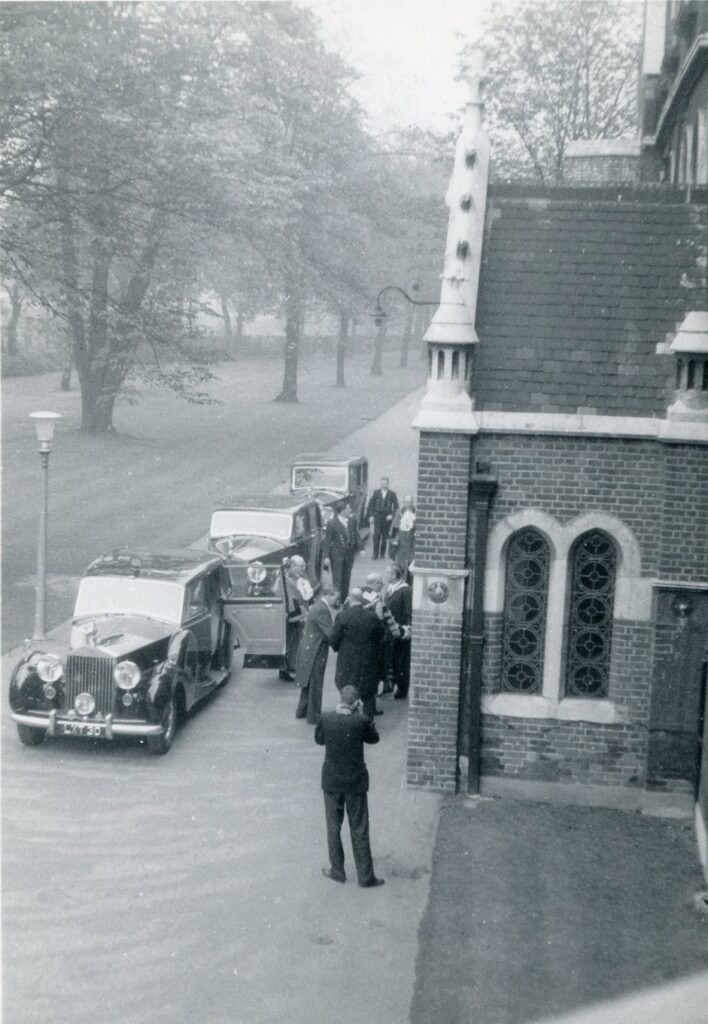 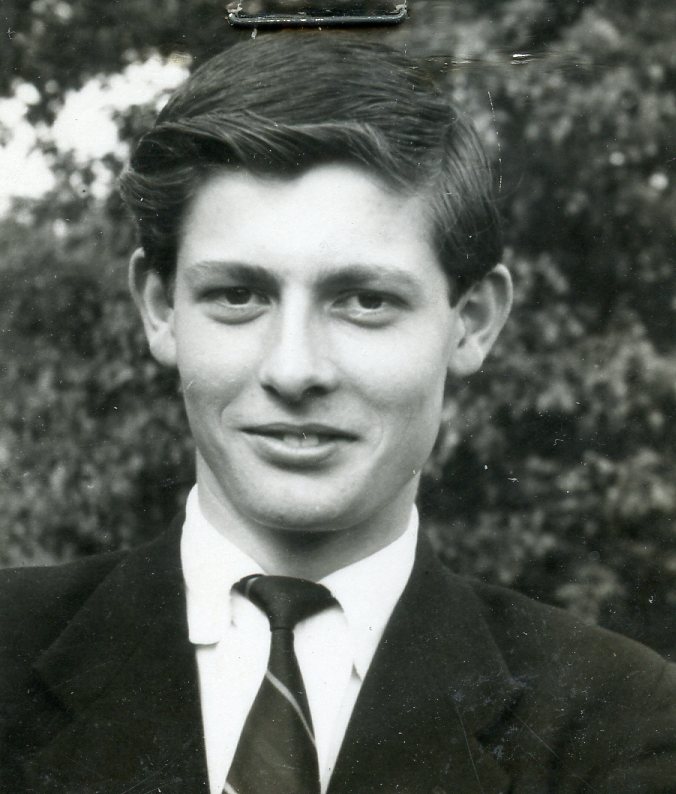 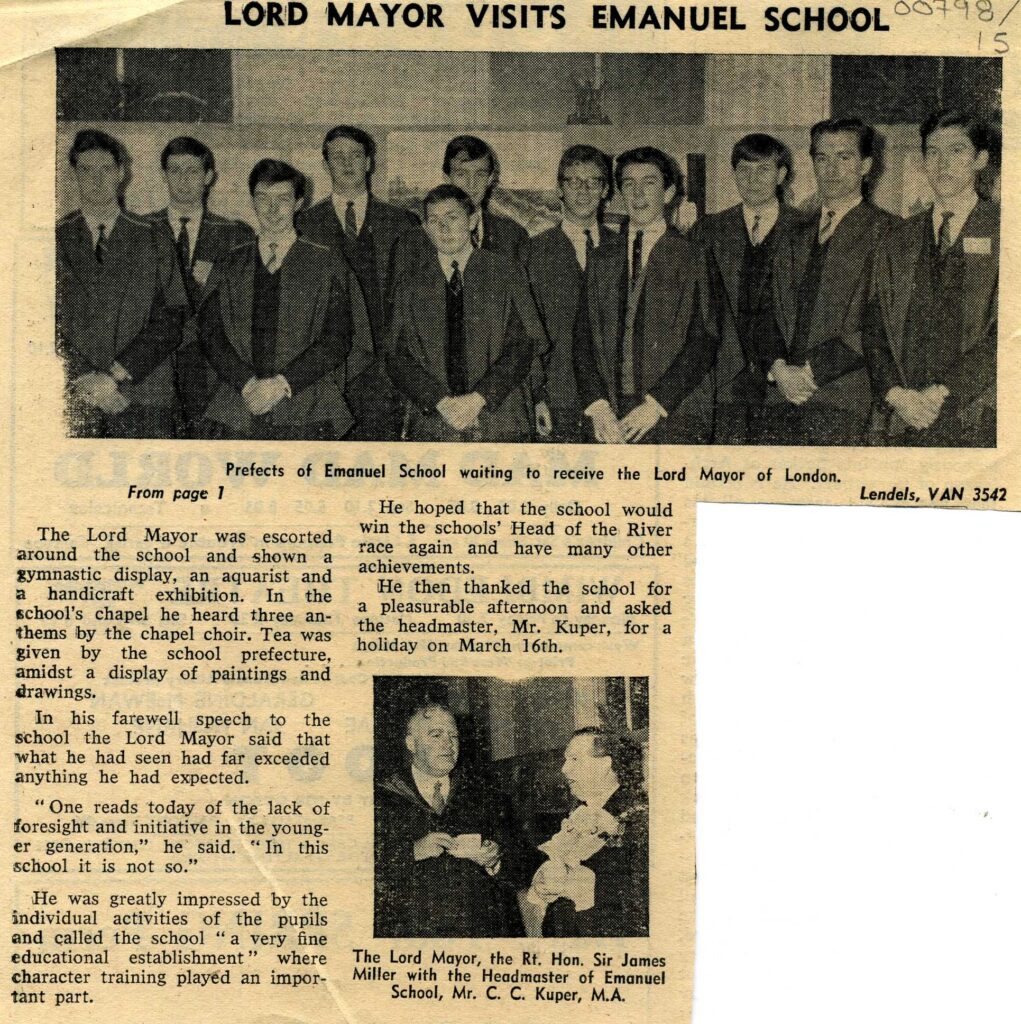 Can you share any funny moments from your time as School Captain?

I remember the time when the Emanuel VIII had been beaten by the Phillips Exeter Academy VIII in the Princess Elizabeth Cup Final at Henley, and we graciously invited the Americans to tea at the school. When they arrived in the dining hall, I was stunned by the size and sheer physical presence of those boys! Little did I know then that my first teaching job would be at that same prestigious American school!

A second fun time was April Fools’ Day when we school prefects decided to stay late at school in order to empty the dining hall of the tables and benches and construct a pyramid on the roof of Hamden Hall.  As students arrived in the morning, we all took a bow before reassembling the dining hall to its ordained seating plan.

Who was the Headmaster during your time?

I happened to be School Captain at an unusual time in the School’s history, and equally unusually and until then uniquely, I was School Captain for two years. Dr. (Jack) Grundy was Head to begin with, then, for reasons I forget, Deputy Head W. Stafford “Pump” Hipkins took over. During my second year, Mr. Kuper became Head.

Dr. Grundy was a remarkable, if not very popular, Head. He was the sole survivor of five brothers after World War I.  He was an interrogator during the war and I and a handful of others who were preparing for German A level benefited from his teaching and his fluent German. Dr. Grundy lived with his family in the main school building in those days, but I have no memory of ever meeting his family or entering the family quarters.

“Pump” was a dear man, but seemed to feel quite at sea when it came to running the school, so he asked me to be his second in command! I was not quite sure what that meant, but it was quite flattering. He certainly confided in me, which he probably should not have done.

Mr. Kuper was a big personality. He often appeared on television holding forth on the challenges of British education. I have no idea what staff thought of him, but for us students he was different. He introduced the prefect gown, for example. It was a little embarrassing, truth be told. It was a short gown, about rump length, and he was very pleased with his innovation.  He was a big man physically, which matched his large personality. He was always jovial and seemed to enjoy his television celebrity. He was very kind, however, and stopped me in the hallway one day and asked if I’d like to go to Canada. I assumed he was joking, but I soon discovered that he had nominated me for a W.H. Rhodes Scholarship in Canada for that summer. I won one of the scholarships, and that memorable summer in Canada was my first introduction to the New World.

What are your proudest moments?

I believe my colleagues and I in the Prefects’ Study served the school well, and that we grew in turn. We were all House Captains as well, so many of our finest moments came from House contests. I am pleased that the current Head came from Wimbledon College, since my fondest cross-country memory is of winning that particular race against Wimbledon and running my personal best time!

Probably the biggest lesson I learned was to view prefecture as service, and to this day I look for ways to serve the wider community. 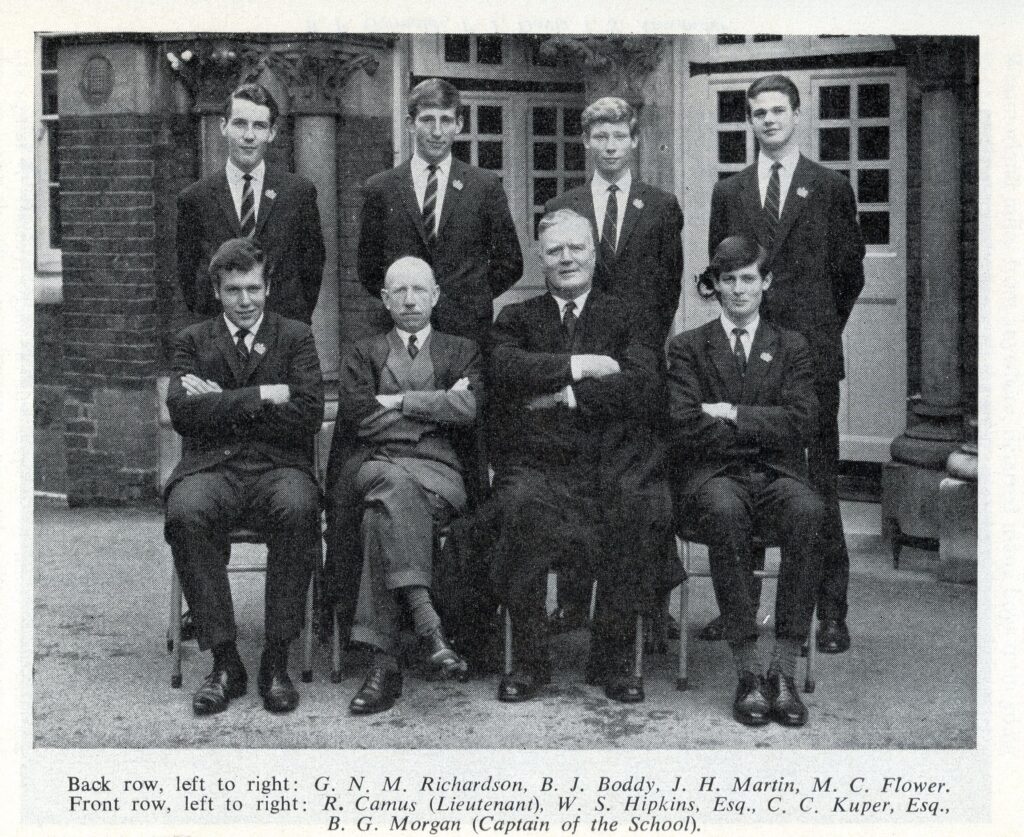 Are you still in touch with Emanuel friends?

I came to the U.S. in 1969, so the only contact I had with Emanuel was through the North American Old Emanuel Organization, which now seems to be defunct.  About forty years after leaving Emanuel I had a surprise visit from one of my very best friends, Barry Boddy, fellow Prefect and Captain of Clyde House. Barry and I had been friends and almost neighbours since primary school. We were the only two boys to go on to Emanuel for secondary school from St. Mary’s Primary. He gave me a photo of us finishing the 880-yard race in a dead heat in the school athletics contest. Neither of us was willing to let the other win.

I was so pleased when the school invited Old Emanuels from the ‘60s to return to school two years ago. I jumped at the chance to see so many old friends again after fifty years! My wife came with me and it was a joy to introduce her to those friends. In many ways it was as if time had stood still! Even better was the trip that Joyce and I made to the UK the following year. We were hosted by OEs Guy Richardson and Roy Camus during that trip.

What did you go when you left Emanuel?

After Emanuel and the WH Rhodes summer in Canada, I went to King’s Cambridge to study French and Russian. At the end of my second year, Prof. Elizabeth Hill approached me to suggest that I apply for a new undergraduate scholarship at Moscow State University (MGU). Opportunities to spend extended time in the USSR were very rare. I was accepted and went to Moscow on the year of the 50th anniversary of the Great October Socialist Revolution, so it was quite eventful. I came back to finish up at Cambridge, then left for the USA to join my wife, whom I had met in Moscow, and to begin my career as a teacher in New Hampshire.

At Exeter I taught French and Russian, and occasionally German when needed.  In the summers I taught in the Summer School for many years until I became Dean, then Director for eight years. I also coached track & field, indoors in the winter, outdoors in the spring.

After 26 years at Exeter I became Director of the progressive Putney School in Vermont.  I enjoyed that for twelve years, the most difficult time being the September 11, 2001 terrorist attacks on New York and Washington DC.

After Putney I became Head of the small and struggling White Mountain School in New Hampshire. I spent four years at White Mountain before trying to retire. Retirement did not take.  A former student who worked with a distance learning school based in Brattleboro, VT, close to my home, asked me to apply to run the high school program there.  I applied and was hired. I knew nothing about non-brick and mortar schools or about distance learning but the experience was a learning opportunity.  Given the exorbitant cost of private education in traditional schools in the US, Oak Meadow is relatively affordable and may well be the model for independent education in the future. While Oak Meadow was exhilarating, I stayed only a year before joining my wife’s educational consultancy.  We both plan on fully retiring at last this year.

What advice would you give anyone hoping to get into your industry?

My only advice for anyone planning on teaching as a career is that one teaches children primarily before subject matter. A student must have confidence in order to become a fine student.

What’s something you might say to your former self if you came across yourself in the playground?

Be humble. Be empathetic. Always think of others. Don’t forget that real life happens while you’re busy making plans!

I chair the Outreach Committee at our Church, as well as serve as a lay minister. I also volunteer for a remarkable international student exchange program, now in its fifty-first year. It is extremely fulfilling.

Needless to say, I enjoy reading books that I’ve never had the time to read.

Do you have any good advice on spending time in isolation?

We live on top of a ridge and we are relatively isolated physically.  Since travel is now precluded, we’ve spent a great deal of time preparing the vegetable garden. My wife is making scores of face masks for local organisations, including our local hospital and rest homes. I enjoy keeping the bird feeders filled on my deck and watching the birds arrive from more southerly climes. 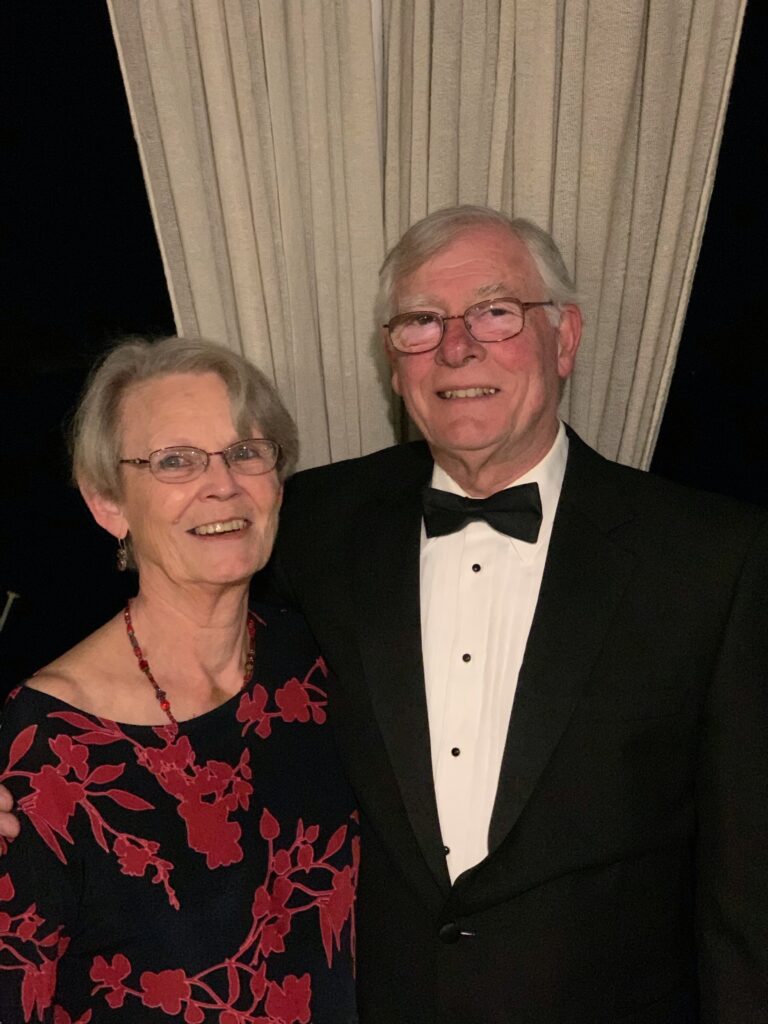