‘Zooming’ in on the IT department

After the strangest of terms, everyone in the school community will be releasing a huge sigh of relief. But perhaps the loudest cry of “I’m glad that’s all over!” will be heard from the IT Department who have developed and supported the complex migration to online teaching this term. Considering the level of uncertainty which we all faced last March, the switch from the classroom to the living room or bedroom has gone remarkably smoothly and we are grateful to the efforts of the IT support team who have facilitated this.

If you’re an OE or parent reading this, you may be surprised to hear that IT is currently led by Emanuel’s longest serving member of staff, Mr John Layng (whoever said “you cannot teach an old dog new tricks” should surely eat their words!) When Mr Layng arrived at Emanuel way back in 1982 to teach Biology and coach rowing he was already writing programs for his BBC microcomputer, but could never have envisaged that 38 years later he would find himself leading the IT Department. John was already Assistant Head, in charge of co-curricular education, and if he had realised that a few short months later Covid-19 would be dominating the educational landscape he might have thought twice about accepting the IT job! 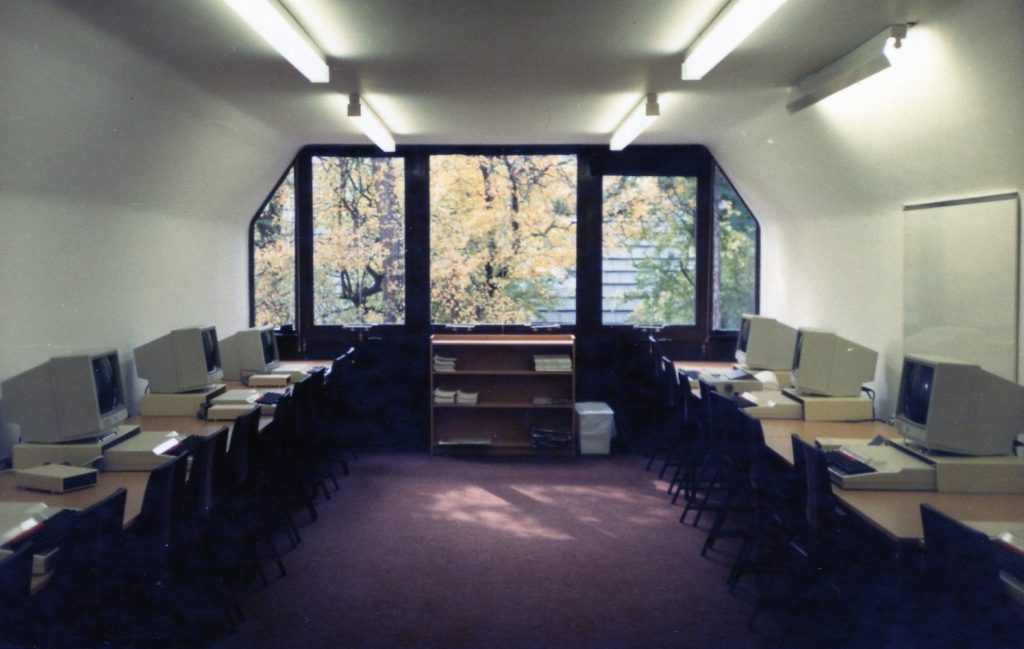 Now a Year 7 classroom, this was Emanuel’s first IT classroom in the 1980s.

John, in the first instance, was very ably assisted by Vanessa Rodnight (Head of IT & Compliance) who has worked as a project manager at Emanuel since 2017 and who, coincidentally, was also very new to the job when Covid-19 struck! Thankfully, Vanessa had previously worked on a number of IT implementation projects, but had never introduced new systems and ways of working at such speed or with such high numbers of take up as in the last few months.

Covid-19 impacted all aspects of Emanuel School with almost all teachers having to work remotely and with the majority of pupils not visiting the school site for the entire third term. This is only the second time in the school’s history, the Second World War being the first, where the school population was entirely absent for such a lengthy spell. We caught up with John for his thoughts on the successes and some detailed reflection on this rather ‘remote’ term.

Looking back over an entire term of remote learning, what were the biggest challenges?

“We were fortunate that the last two weeks of term in the spring allowed us to trial different approaches amongst the community and the feedback from that was used to create a uniform approach for the summer. Spending the Easter holiday setting up the process and creating training materials for staff and pupils was a challenge as all of this information had to be delivered remotely. It’s so much easier when you can sit beside someone and take them through a process. However, by the use of carefully written help pages, videos and links to other sites we seemed to have got the message across. We ran plenty of ‘drop in’ and clinic sessions for staff and pupils throughout the first half of the term. Running school exams for Years 9, 10 and 12 remotely could have been a challenge but the process was remarkably smooth as everyone was familiar with the tools by the time the exams came around.”

In the early stages you must have realised you were facing a monumental task?

“Yes… but life must go on and we knew we had to develop something as it was obvious that we would be off site for most, if not all, of the term. We used feedback from colleagues and pupils to design something that was as simple as we could make it as we knew that we would have to introduce it remotely.”

How challenging has it been having the IT team working from different locations?

“My experience at the moment is that it has actually been easier to meet and communicate with the team in the virtual world than in the real one! Some of the issues for the technicians is that we still have some physical resources on site (servers etc.) so there is always a need for some jobs to be worked on at school in order to maintain our systems. Even when off-site our technicians have always been readily available to assist staff and pupils with queries and to be frank have done an absolutely amazing job supporting the whole community.”

Had you ever used Zoom before March this year?

“Zoom was a relatively new tool to me. I had used GoToMeeting, Teams and Google’s various tools before. Zoom fitted our brief in terms of making the meetings as secure as possible for staff and pupils and straightforward to arrange.”

Other than Teams, ShowMyHomework, Zoom and OneNote, have other services/platforms been crucial to the success of the last term?

“Firefly of course! Firefly is a great way of sharing the resources needed for a lesson and you can build quizzes and assessments into its pages as well as videos and other web pages. However, it was really important to keep the introduction of new applications to a minimum as asking staff and pupils to change their way of working was a big ask and we wanted to try and keep it as simple as possible – it was never going to be easy but I think we made it as straightforward as we could under the circumstances.”

Could you tell us a little more about the initiative to donate laptops to Westminster City School?

“These were old laptops that we were planning to replace over the summer as they no longer fitted our requirements, so were not needed in our stock. We were fortunate that IT technicians from an Emanuel parent’s company, who were on furlough, volunteered to refresh and update these devices for us for free. All we had to do was get the devices to them – this was done by a courier who also donated their services for free as well. It was a bit of a team effort and it has meant that pupils from WCS, one of our Foundation partners, have been able to get online and keep up with their teaching whilst they have been out of school.”

Few in Emanuel have had more varied jobs that yourself. How does the last six months overseeing IT fit into your many years at Emanuel?

“I either like a challenge or I really am Emanuel’s jack-of-all-trades! I had planned that our strategic roll-out of IT changes would have been at a slightly less frenetic pace given the chance but the situation that we find ourselves in has meant that a number of changes have been made very quickly. I have been continually amazed at the adaptability of the staff and pupils switching from, in some cases, very traditional methods to a 21st Century way of working, and although there have been problems here and there it has been relatively straightforward. The amazing support of Vanessa Rodnight and her team has made the changes of the last six months very easy to manage.”

Are you going to have some computer ‘downtime’ over the holidays?

John: “That’s the plan but I can already see a little list of jobs developing to help make systems work more efficiently in the future. If I can get off grid for a week or two it will be very welcome!”

Vanessa: “We will be preparing for the new school year. However, little did I know in January that my father inviting me to join him on a woodworking course in August would be so highly anticipated – it will be a week of technology detox!”

On behalf of the school we would like to thank John, Vanessa and the entire IT department of Ish, Dan, Quinn and Kaba for their terrific efforts over this challenging period in education. Hopefully none of us will have to say “you’re on mute” for a while!