Congratulations to all of the one hundred and sixty two Emanuel students who recently took part in this year’s IMC.

The comparative results table below illustrates the incredible standard achieved by this group of students. It is worth noting that although the mark required to get each award varies, the proportion of entries getting a gold, silver and bronze remains constant: 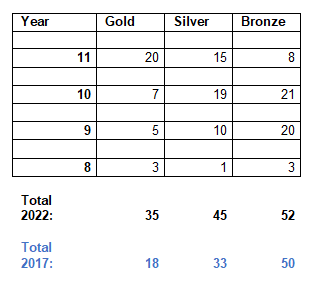 Although there were lots of brilliant performances, Farhan in Year 8, deserves a special mention for not only finishing top of the pile, but also for recently scoring the second highest mark in the school in the Senior version of this event, the SMC.

I would also like to congratulate two Year 12 pupils, Freya and Lucy who recently achieved a Merit and Distinction respectively in the recent British Mathematical Olympiad. To put this in perspective, in Emanuel’s long history, only two pupils have previously achieved a distinction, both of whom went on to study STEM at top academic institutions.

Finally, we must thank Miss Taylor for organising all of these invaluable mathematics competitions in such a precise and professional manner.