Despite the disruption caused by Covid -19 leaving many cricketers relying on remote cricket sessions throughout the entirety of last summer, this summer has seen the students bounce back with some fantastic performances throughout the school.

The U15 girls made it through to their hardball semi-final losing out in the end to a very strong Reigate side. In the same year group, the U15 boys side were losing finalists in their London Schools T20 competition after a fantastic semi final victory over UCS.

The U14 boys missed out on a place in the final of their respective cup competition, losing a great game against City of London school in the semi-final.

The U13 girls continue to show great progress in both hard and soft ball competitions. Making it through to the final of the softball cup with notable victories over strong Alleyn’s and Croydon High school sides along the way. They will play against Guilford in the final which will take place in early September. In the hard ball competition the girls came up short by just 13 runs in the semi-final against a strong Surbiton High school.

The U12 boys side will hope to finish their season of cricket on a high as they have made it through to the final of their respective cup competition which will see them travel to finals day at Dulwich to take on the winner of the semi-final between the hosts and Latymer.

Finally, see the report below from the U13 Boys who were victorious in the London Schools T20 Cup competition on Friday.

The U13A boys side experienced a fantastic finish to their cricket season with a 9 wicket victory over UCS London to become the London Schools T20 champions.

Welcoming UCS to Blagdons on a glorious morning for cricket, the UCS captain won the toss and chose to bat first leaving Emanuel excited to show what they could do in the field. They did not disappoint and as has been the case for the whole season, the bowlers set the tone beautifully with Daisy and Fred amongst the early wickets. They were brilliantly supported by excellent run out from Demir. Leaving UCS 29-4!

UCS then consolidated nicely with some good shots keeping the scoreboard ticking at between 4 and 5 an over. The introduction of recent spin converts Karan and Kieran once again put the breaks on with 2 wickets each, UCS were finally bowled out for a competitive 94 all out. Seb contributing 3 catches!

It was then the turn of the Emanuel batters to begin their chase, 95 runs required in 20 overs is not an easy chase on paper but the batters started full of confidence and despite losing their opener Karan for 8 in the opening over, a partnership of 87 runs from Fergus and captain Kit were unfazed in their pursuit of a season high score. Kit in particular was in commanding form, punishing anything loose to the boundary and fittingly finished the game in the 13th over with a 4 to take himself to an unbeaten half century. Supported ably by Fergus finishing on 28.

Hopefully a sign of a bright future for all involved! 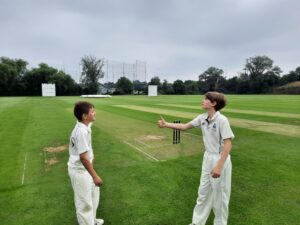 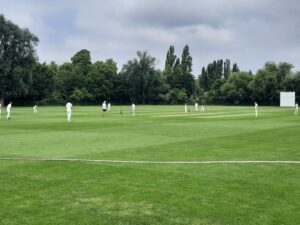 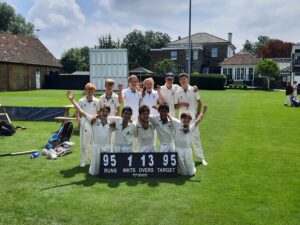 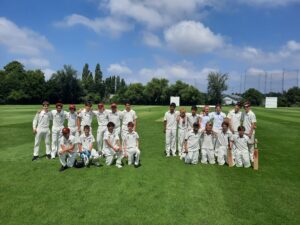