Emanuel and the Community by Colin Sutherland (OE1945-53)

OE Colin Sutherland was awarded the MBE in 2013 for his volunteering and community work in Scouting, education and community affairs. At the award ceremony, Prince Charles asked him what had led him to get so involved in volunteering for so many years. Colin replied that it was his education at Emanuel School. Here, Colin tells us about his formative years at Emanuel and how the ethos of giving back, still so important today, was instilled in him at school.

I came to Emanuel in 1945 having just been through the second world war. My story of those days is in my book A Boy’s War which is in the school library. The war plus having wonderful parents set me up for what Emanuel had to offer. I was lucky in the timing because my family could never have afforded school fees. For this reason, I am keen to support the fund for transformative bursaries at Emanuel.

I still remember the head, Cyril Broom, giving inspiring talks to us after morning assembly in the Hampden Hall. He told us that serving your country and making every part of it as perfect as possible meant attending to big and little things alike. Litter picking up was an obsession of his but that just reinforced the general message. Always treating other people with respect, no matter who they were, was another important message and one my father and mother were also really keen on.

The facilities available at war-damaged Emanuel were basic to say the least. We went through the awful 1947 winter with classroom heating that consisted of a coke stove stood on a steel sheet near the teacher’s desk. If you were at the back of the room you froze.  Without the experience of having been through the war we would not have survived; a better way of engendering community spirit could not be imagined. We all came through it together.

The House system was at the core of school life. We knew that Howe was the best from the day we started at Emanuel and did everything we could to support it. As the years went by that feeling grew. When, as a young fellow, you had been helped by a more senior pupil in your House it cemented in place not only a loyalty to the House but the feeling that you had to look after those less able to look after themselves. When, much later, I became a school governor locally here our primary school had to match Howe House and Emanuel for community spirit.

I became involved with the Scout Movement in 1968 when my son started Cubs, never having been a scout myself. The troop I ran and then, eventually, our whole Scout Group was based on my experience at Emanuel. When I took the boys hiking and then sat with them round the camp fire, the songs we sang were those we had sung in the coach going to and from rugby matches. The whole basis of my scouting ethos was that we had to be the best that we could possibly be and we made a habit of winning practically any scouting competition we entered. This was Howe House again.

The MBE was a big surprise and was based on my work and community involvement. After Emanuel and National Service, I completely repositioned myself as an engineer, which meant years of hard slog study and examinations. I set up and led my own consultancy practice and then national organisations. I was able to provide them with leadership and, once again, this came from Emanuel. I still chair a BSI technical committee.

Emanuel gave me the motivation to not only become involved with school governorship and scouting but also with our residents’ association and other causes. Everything had to be the best it could be and that still motivates me today as I go along Park Road picking up litter. We have raised money for Help for Heroes but are now very much involved with the British Legion.

I met my wife, Jean, in 1951.  She went to Clapham County Secondary School and came to the Emanuel prefects’ dances. Her younger brother, Michael Hoare, was at Emanuel having started in Miss Bedford’s class. Jean and I married in 1956.

We have been involved in teaching and helping the handicapped for many years and became seriously involved in raising money for our charitable causes using our large garden and its model railway. This year would have been our 24th annual event but, of course, it could not go ahead due to the pandemic. However, old Emanuels are not put off by that so we put an appeal out online and raised nearly the same amount as we usually do for the two charities that we support – £1000 each to Home Start that helps families and The Cochlear Implant Children’s Support Group, because at the age of three our youngest granddaughter had meningitis which left her profoundly deaf and she had the implant at Great Ormond Street. This helped her to a very successful and happy career.

We have two other grandchildren and one great grandson who live in Copenhagen and another grandson who is in Sydney where our son lived for some years. He is now in Toronto, Canada and we have a daughter in Switzerland, so unlike us they have settled all over the world. We all keep in touch.

Jean and I both feel that the Emanuel spirit has run through our lives and continues to do so.

We are very pleased to see the school playing such an important role in its community and know for certain that Cyril Broom would have been delighted to see what you are achieving. 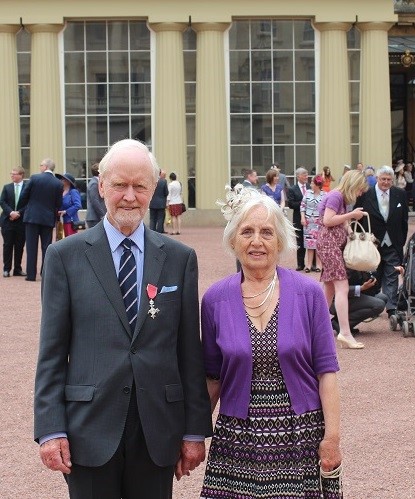 Colin Sutherland and his wife, after receiving the MBE