Darcy Jennings (OE2010-2017), student athlete at the University of Alabama

Darcy Jennings is completing her final year as a student athlete studying Chemical Engineering at the University of Alabama. Appointed Captain of Boats, Darcy was a legend in Emanuel rowing, winning gold at the National Schools’ Regatta in the Coxed Four and a silver the following year in a pair. At the University of Alabama, she has continued her successful rowing career and is captain of the university team, training hard to compete all over the States.

We caught up with Darcy to find out what it’s like to be a student athlete in the US.

I loved my time at Emanuel and have far too many good stories to tell. The thing I’ll never forget about Emanuel is how caring our year group was; I felt like I could have a laugh with every single person in my year and I loved that.

I had the same chemistry teacher, Mrs Hanlan, through GCSE and A Level and she sparked my interest in science. She truly had an impact on how I carried myself as a student. I remember she used to always tell me off in Year 10 and I used to complain bitterly, but by the end of Sixth Form I appreciated it all and valued the effort she took to make me a better pupil. We even had a laugh about it when I was in Upper Sixth. I probably wouldn’t be studying Chemical Engineering right now if it wasn’t for her.

So much of my success is owed to the coaching staff at Emanuel. I am most grateful for Ali and George, who work solely at the boathouse. They believed in me and my success from a young age, which is something I really needed at the time. Hannah Blaikie joined rowing when I was in Year 11; having a powerful young, female coach was truly inspiring. To do this day I still keep in contact with the coaches I cherish from my Emanuel days.

What made you decide to study in the States?

I remember my mum was the first to tell me about the option to study in the US after coming across the Sporting Elite agency tent at the National Schools’ Regatta. The most inviting part of the opportunity to study in the US was the full scholarship; I could leave university with no student debt. Then I researched how highly American universities regard their athletes and how many benefits they receive and that was really impressive to me. It felt like the closest I could get to feeling like a professional athlete while still pursuing a degree. The facilities are unreal too. My dad came to visit me in Alabama in October before the pandemic and I took him to an American football game. He was shocked by the sheer size of the stadium and kept telling me how it’s four times the size of Fulham and they’re a professional team!

Can you tell us about your experience of attending an American university?

My experience is probably pretty different from others. I went to the University of Minnesota for my first year and a half and then transferred to the University of Alabama to complete my four-year degree. I went into it with a very different expectation than what it was. University as a student athlete is hard and I struggled juggling all my commitments during my first semester. I noticed cultural differences too, especially because I’ve attended polar opposite universities. I really went as north as you can go and then came as south as you can. It’s just a crazy experience; I don’t even know how to describe it but it has been the best experience of my life so far. I love the University of Alabama and have embodied the pride that Americans carry for their universities.

What does being a student athlete involve? Which sports do you do?

Athletics in America is highly regulated and there are lots of rules – one of which is we can only train for a maximum of 20 hours per week. I’m on the rowing team so I have practices 6.00am to 8.30am six mornings a week and then afternoon practices for roughly an hour four times a week. It’s a big time commitment on top of my major but the athletic department provides athletes with tutors and academic advisors, which is a huge help. The best part of being a student athlete is competing. Rowing is a spring sport so we start racing at the start of March and keep going to races until the end of May. Travelling with all your teammates is so much fun and this year we’ll be heading to race in Las Vegas (Nevada), Sarasota (Florida), Austin (Texas), Cincinnati (Ohio) and Oak Ridge (Tennessee).

How much has the pandemic affected your university experience and your life?

The pandemic meant I wasn’t able to go home for summer or Christmas, which has been tough. However, a positive was that I was able to explore Pittsburgh and Charleston over winter break. The pandemic has had a huge affect on my life as a student athlete too. Our season was cancelled last year, which was truly heart breaking and training this year has been an adjustment. Online school is also a whole new ball game; I’ve struggled staying engaged with everything on Zoom.

What was it like being in the States during the election campaign?

I didn’t feel many repercussions from the election campaign. Of course it was the talk of the town and watching the inauguration with my American friends was a powerful moment. It was tougher being in the States during the George Floyd riots. The pain you could feel across the country was immense, almost incomprehensible. I attended peaceful protests and even did a fundraiser for Black Lives Matter with my teammate during that time. It’s hard to be in a country where systemic racism is blindingly obvious. Although I’m optimistic for the next four years, I think the change in leadership will have a powerful impact on the country. 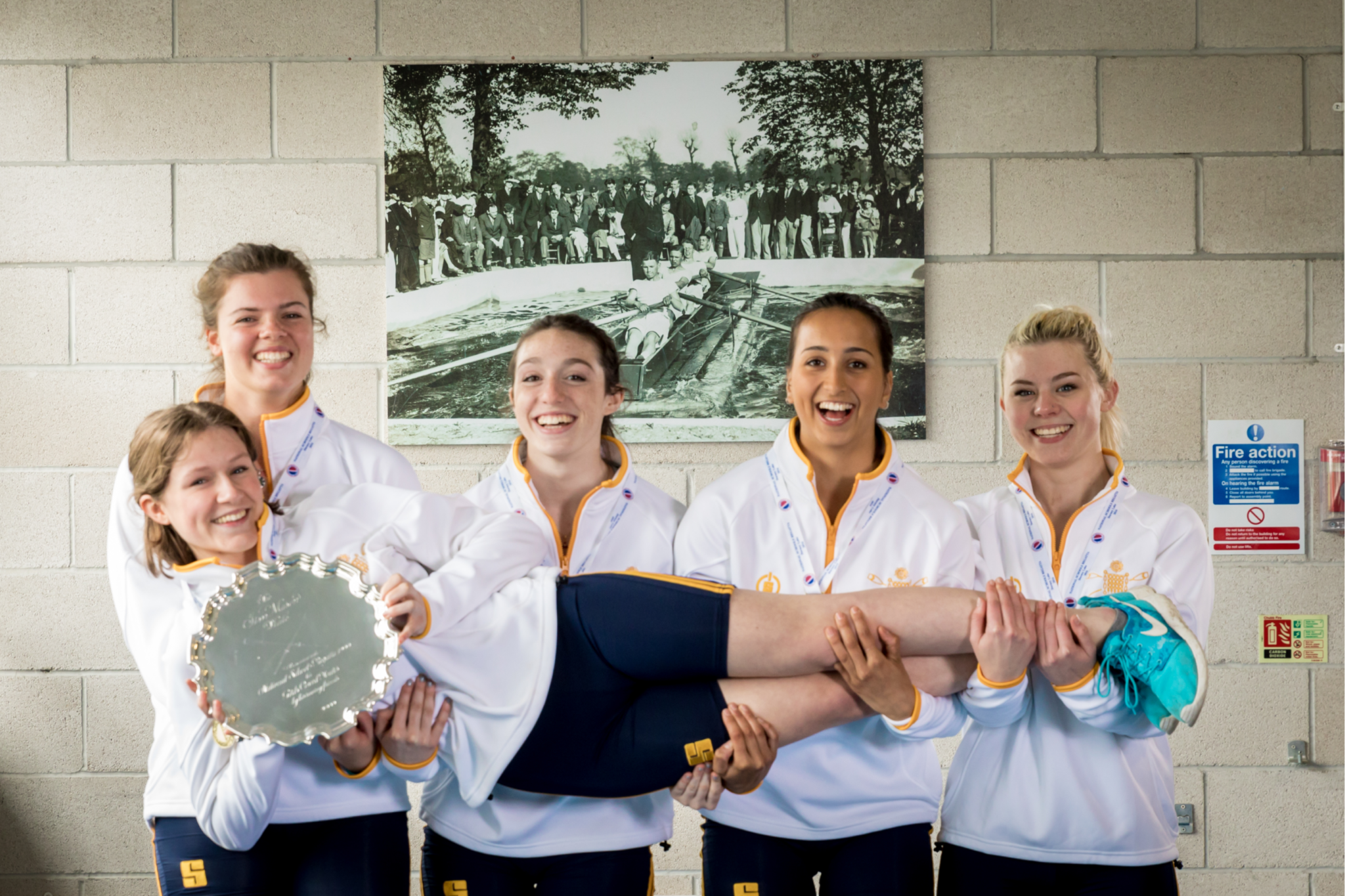 Can you tell us what you think about girls’ rowing at Emanuel?

Girls’ rowing at Emanuel is epic! I have huge respect for all the girls (and boys) that commit their time to the sport. Emanuel rowing has so many heroes; there are so many people that give an unreal level of commitment to every student that chooses the sport (the coaches, the boatman and the Saturday bacon butty parents!). Whenever I went to the boathouse I knew that the entire staff were rooting for my success and that was a special feeling. I can never thank them enough!

I’m most proud of what I achieved through rowing (oarswoman awards, national schools medals and captain of boats) and hope I inspired other girls to pursue the sport. It truly is the most rewarding sport; it teaches you the value of hard-work and perseverance.

Friends are just as valuable as family.

Have you stayed in touch with Emanuel friends?

I have! I regularly FaceTime and text my close friends from school and every time I come home to see them it feels like I never even left. Unfortunately, I haven’t been home to visit since last Christmas because of the pandemic. I’m very excited to return home this summer so I can catch up with my friends face-to-face instead of virtually!

Do you think you will continue rowing after you leave university?

Absolutely! I’m not sure I’ll keep going competitively but I will be moving somewhere that I can take a single out on the water a few mornings a week.

What do you plan to do when you finish your degree?

I’m not 100% sure but I am hoping to move to Charleston and join my best friend who moved there after graduating last year.

What’s something you might say to your former self if you came across yourself in the school playground?

Enjoy everything life throws at you and never say no to an opportunity!

I love cooking, hanging with my friends and being lazy after a hard week of training!

Is there anything else you would like to add?

If anyone that is interested in studying in the States has any questions, please reach out. I’m easy to find on LinkedIn and Instagram.