Bill Purkis was a teacher at Emanuel for 34 years and Head of Geography and Clyde House for over twenty years. Bill was known for his ‘laconic sarcasm and wit’ as noted in his Portcullis Valete in 2009. We think the photo below was taken by OE David Bowles who referred to it as ‘Bill’s 1970s hippy phase’.

Bill’s great love was football and he was the staff team’s most reliable full-back for many years. He is also a lifelong Manchester City fan and supported them through the thick and thin of the lower reaches of the English Football League in those days.

After an Emanuel Alumni Facebook post attracted lots of comments, we caught up with Bill during lockdown to ask him a few questions:

What can you remember about your first day at Emanuel?

Nothing but I do remember my interview with Don Brittain, the head of geography at the time. Having finished the interview, we spent about an hour trying to find the headmaster. Eventually we found him (Mr Kuper) on the rugby field. It was the only time I saw him.

What are your memories of room 11? Were you aware that it was referred to as the ‘Man Cave’?

I was in room 13 first which became part of Music. Room 11 had an old drinking fountain which became a dumping ground for unwanted food. This attracted pigeons who wandered into room 11 and then, unable to find a way out, flew around the room defecating on the pupils below. We developed a technique of closing all curtains and leaving the door as the only exit.

A few pupils have mentioned Geology. Was that taught as a separate subject?

Geology was my main subject. It had its own lab with a collection far better than most. Numbers fluctuated but at one point I taught more periods than were available on the timetable. The set was divided into shifts as they could not all get in at the same time.

Can you relate any funny stories from teaching?

The lab had a dodgy light which failed to come on at first. I told the boys to raise their hands until it came on. “Ah, many hands make light work.”

Are you aware of any nicknames you had at school?

I dread to think.

Were you aware that you had a reputation for being ‘scary’?

Did pupils enjoy ribbing you about the lack of success of Manchester City over the period you taught here?

It has all changed now! I do remember giving a RE lesson putting forth the idea that MCFC was a valid religion.

How have you been spending your time since you left Emanuel?

I had a stroke and three grandsons. My wife and I are Special Guardians of one of our grandsons who lives with us. Our dream of travelling outside school holidays and getting cheaper prices at last vanished. Still, we have not done so badly – some of the places we have visited are Mauritius, South Africa, Italy, Greece, Cyprus, Turkey, Australia and New Zealand. One thing I have learnt is do not try to push a buggy on Bondi beach.

At the time of writing, we are in lockdown with our two grandsons. 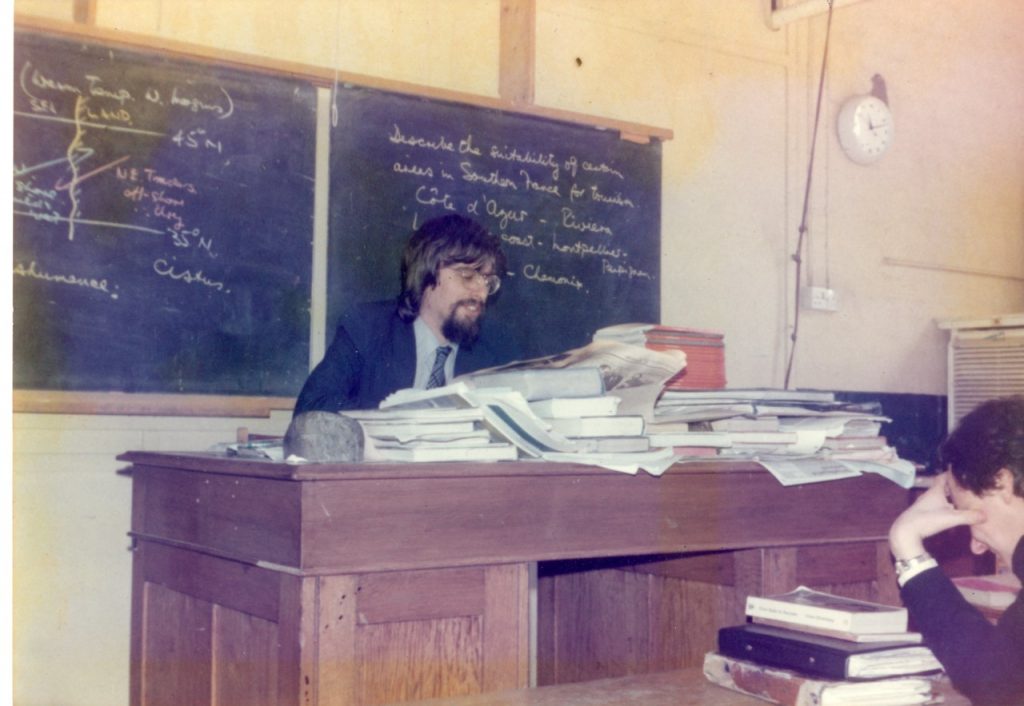 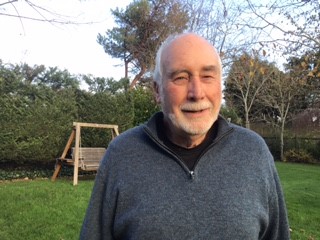 Michael Stewart had a very long association with Emanuel School, having been a pupil from 1955-1963 and a member of the Modern Foreign Languages department from 1968-1983. He went on to become Deputy Head at Oakwood Park Grammar School and later Headmaster of Spalding Grammar School in Lincolnshire. Michael shared his memories of being a pupil and teacher with us recently.

“In 1955, when my secondary school life began, Emanuel seemed a harsh and oppressive place.  It didn’t change that much during my eight years but one of the many delights of my time there was finding subtle (and not so subtle) ways of playing the system – a valuable life-lesson. This was done in the company of truly great friends, Kevin Tinker and Alec Parley especially, many of whom I still see.  All those friendships undoubtedly come top of the list of my happiest memories of Emanuel.  1st XI cricket and 2nd XV rugby also feature strongly. 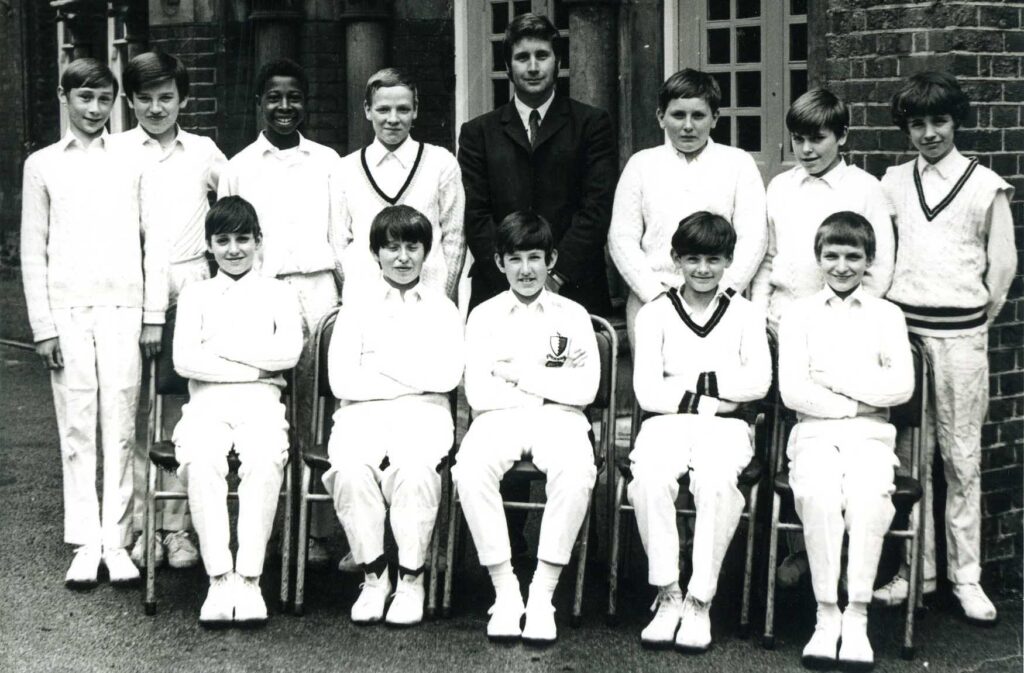 The teaching was pretty good too. Paul Craddock was a major influence not only in my choice of German and Russian at university but in many of the teaching methods I employed throughout my subsequent 36 years at the blackboard.  Equally influential was Dennis Witcombe who taught me History, actually always my favourite subject, from 1st Form to A Level.

I spent five years at Durham University, switched from German to Russian honours, and after graduating needed a reason to stay on so I could run the weekly university dances and end-of-term balls. I opted for a PGCE. The Who, Fleetwood Mac, Pink Floyd and Chuck Berry were just a few of the big names we secured.  From the outset I absolutely loved the practical side of teaching (much less so the theory, yawn, yawn) and even turned down the offer of a job in the music agent business, at twice a teacher’s salary, in order to accept an invitation to return to Emanuel.  Let’s just say that the interview was delightfully informal.  And the love I initially felt for teaching never left me.

By 1968 Emanuel had become a different place, no longer a cross between a 19th century public school and a sub-division of HM Forces, but now in the liberal and tolerant hands of Charles Kuper. Staff I had known treated me generously and as an equal, notably Paul Craddock and the ever convivial and engaging Charles Cuddon. I made new and lasting friends: Clive Smith and Stuart Thomson from the languages department, and Barry Duesbury, Tony Phillips, Mervyn Davies (briefly), Connor McDermott and later Dick Woodall from among my fellow rugby and cricket “coaches”.  Even my worst schoolboy transgressions paled into insignificance beside the many post-match antics spent in their company. 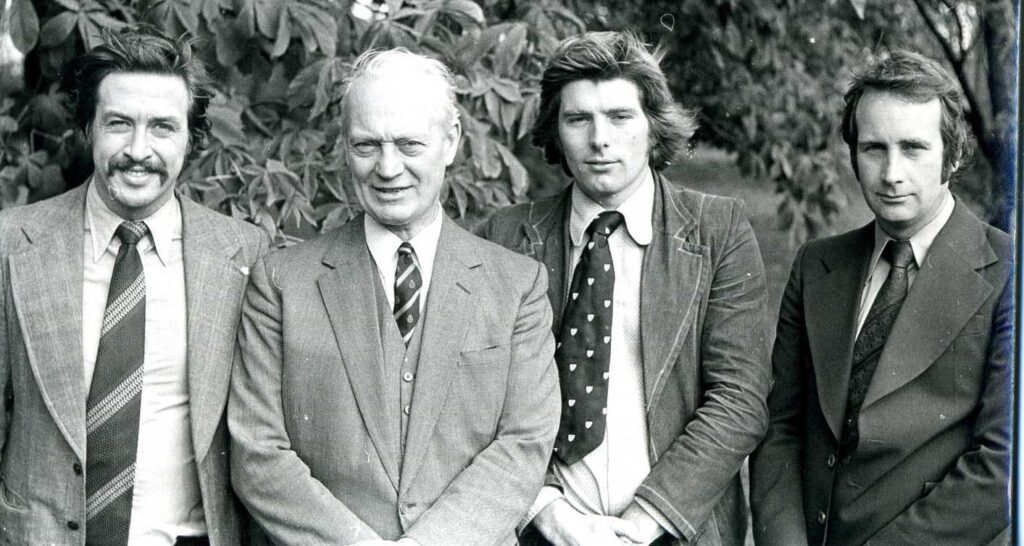 I took rugby and cricket teams throughout my 15 years: junior rugby and eventually 1st XI cricket from 1976 to 1983. The sporting success of nearly all these teams was a source of enormous satisfaction: Ian Payne’s 1st XI of 1976 for example, but perhaps none more so than the star-studded rugby side (Francis Emeruwa et al) who won the U13 Sevens at Rosslyn Park and had 60 consecutive unbeaten matches from U13s to Colts, 1973-76.  Results in the classroom were equally satisfying and rewarding. I still see a number of former pupils from time to time, regularly so in the case of a Russian group who left in the early 1980s…and I don’t seem able to shake off Gary Dibden.

From Emanuel I went as a Deputy Head to Maidstone in 1983 and four years later to the Headship of Spalding Grammar School in Lincolnshire – a great deal less sport now but classroom teaching continued to the end. In these senior roles I never forgot my own schooldays: how easy it could be for more or less any pupil to “transgress” and how essential it was to take an inclusive rather than an authoritarian approach. Only government interference and increasing bureaucratic demands detracted from the absolute pleasure I derived in so many ways from continuing to work in a school environment right up to my retirement in 2004.

In retirement, I returned to Kent and my wife, Brenda, and I took the opportunity to travel extensively all over the world.  I also became involved in a large number of community and charity activities in the vibrant village where we live.  I’m very gradually withdrawing from these nowadays.

It’s a joy to see Emanuel make so many changes for the better in recent years and to see it thrive. Long may it continue to do so and long may I rejoice in all the memories and valuable experiences I had there.” 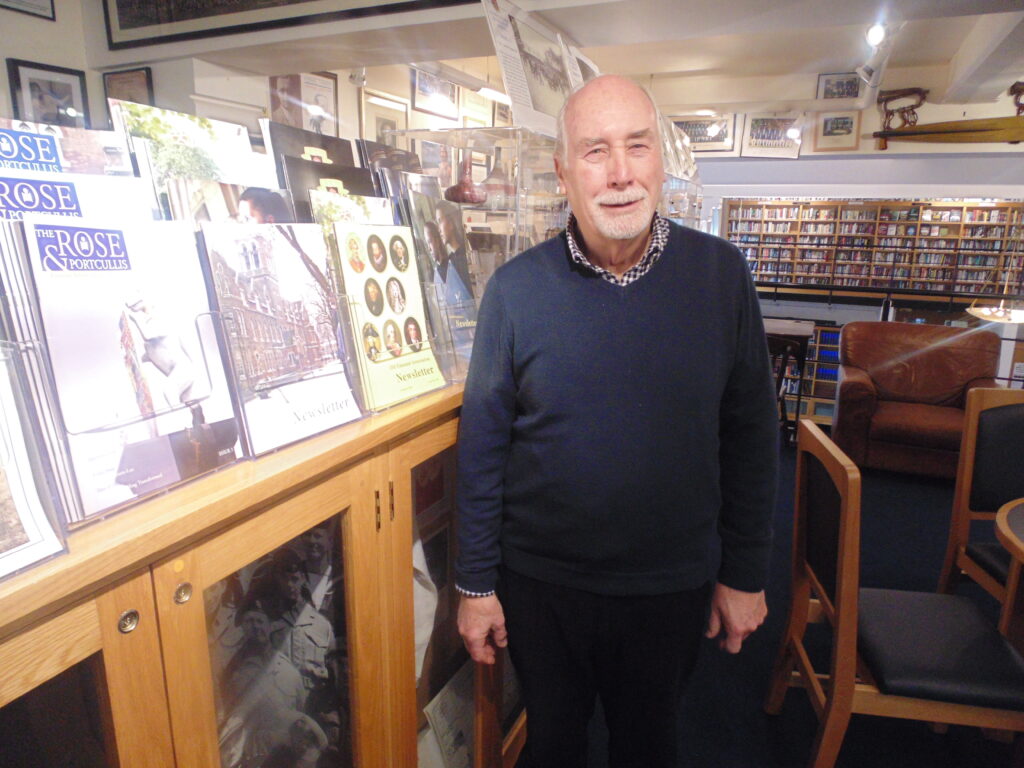